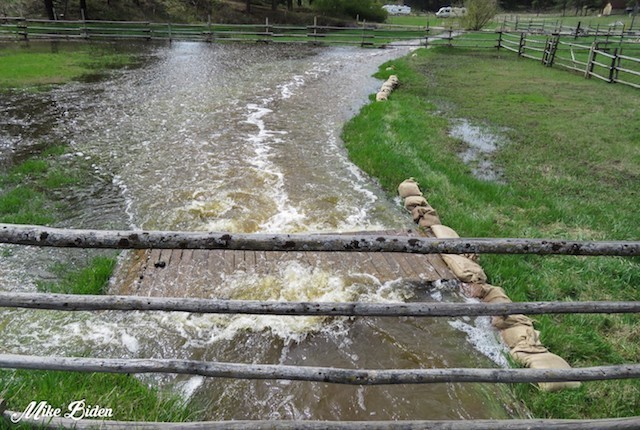 Photo: Mike BidenFlooding on an acreage in Faulder, west of Summerland, in early May. This story is part of a series highlighting each director race within the Regional District of Okanagan-Similkameen.

The newly-elected area director for West Bench/ rural Summerland will have to address what some feel are very contrasting needs in the different neighbourhoods.

Four candidates — Riley Gettens, Rick Hatch, Ashley Jestin and Leah Schulting — are vying for the Area F seat in the municipal election, more candidates than any other rural area in the Regional District of Okanagan-Similkameen.

There were no candidates as of Sept. 13, the day before nominations closed, before six candidates came forward at the last minute — two of whom have since dropped out. Incumbent Michael Brydon, who has been the area director for 10 years, isn't seeking a fourth term.

All candidates acknowledged a need to advocate for the entire area, including Faulder, Meadow Valley and North Beach, as opposed to mainly the West Bench area adjacent to Penticton.

Jestin, a Faulder resident in her thirties, grew up and graduated high school in Summerland and moved back four years ago after working in the film industry in Vancouver.

She's the only candidate running who doesn't reside in the West Bench, and admitted she applied thinking there wasn't going to be a race.

"My complete candidacy is that I'm not from West Bench and I'm going to focus on everybody else first. Because I believe West Bench has everything they need at the moment," Jestin said. "We all have a lack of essential services, the rest of us... I'm not fighting for anything cosmetic, I'm more fighting for services."

Riley Gettens has lived on the West Bench since 2007 and said she has a track record locally of community engagement, including with the Downtown Penticton Association, United Way and with the City of Penticton.

Gettens acknowledged issues rural Summerland residents have faced evacuation orders and alerts from floods and nearby fires recently, as well as issues with uranium in their water. She said she wants to focus on consultation with residents throughout Area F.

"This government and policy and community engagement work is what I love, and I'm pretty good at it. And I would really love the opportunity to do it... And that's really why I'm running."

Hatch has been a West Bench resident for four years and operates a small business, Cherry Tree Permaculture, and also is part of the Penticton Farmer's Market. He said he's served on the PAC at West Bench Elementary School since 2014, and said he was involved with the process to keep the school open.

"The reason they went through with the closure of the school, and it was only kind of saved at the last minute... They projected declining enrolments in the rural areas surrounding Penticton," he said. "And what's actually happening is, after a bit of a lull, we've had pretty steady increases... And that shows that the demographics are changing as well."

Hatch said his platform revolves around "keeping the character of the community," and said he has a strong interest in sustainability and preserving the planet. "I have a desire to go beyond what we can do personally and to influence the local levels of government."

Schulting has had a career in finance and has been a South Okanagan resident of more than two decades, and a West Bench resident for the past five. She said apart from improving services for rural Summerland the Area F director needs to focus on relationships with the Penticton Indian Band.

As well, she said a focus needs to be put on "maintaining the rural ambience" of the West Bench. She added that the area, like rural Summerland, has had close scares with fires, and said they need to push fire safety initiatives, such as FireSmart, and collaborate with the PIB on that.

She also encouraged everyone to vote, and pointed out Red Wing Resort residents can vote in Area F, despite being on PIB land. Only three votes were cast in rural Summerland in the 2014 municipal election, and Schulting said there was only an 18 per cent voter turnout that year.

The RDOS will have roving polls set up in Area F on election day, Oct. 20.